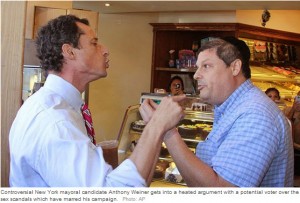 Anthony Weiner is running for the office of Mayor of New York. His sexually addictive behaviors have been getting in the way. He has been caught (again) sexting explicit pictures to other women. He was forced to resign his congressional seat last year for doing the same things.

There are so many different acting-out behaviors that can be part of sexual addiction. Everyone seems to think that with any addiction, all you have to do is “just stop.” It never ceases to amaze me how naive people are when it comes to addiction. People live in so much internal pain these days, they are looking for ways to feel better, to numb out, to make some sense out of their lives. Addiction seems to be a big part of our society. The thought is that is everything is acceptable until someone gets out of control. That fine line between being able to control the substance or the behavior and not allow it to tip the scales, and come to the place where the substance or behavior is in control. Addiction is always progressive! There is always going to be the need for “more” to get to the same “high.”